Imagine a time before motor vehicles when the pace of life was slow and the work was hard. In those days moving produce out of Languedoc was difficult and involved a long sea voyage around Spain and Portugal or along rough, rutted roads with a horse and cart. Wine was moved from wineries in barrels, on carts from villages to towns but to move it any further caused it to spoil with the jostling of the cart.

In the 17th century the market for wine was where the population was growing, mainly in the north, in larger towns

such as Paris but also the lucrative export markets including Holland and the British Isles. In the parts of France that had navigable rivers or where towns were close to the Atlantic such as Bordeaux, it was reasonably easy to move wine north. For Languedoc the nearest Atlantic port was Bordeaux but due to a protectionist law known as the Bordeaux Privilege hardly any Languedoc wine left the French shore from Bordeaux. The only choice left to the folk of Languedoc was a long sea voyage around Spain and Portugal which could also spoil the wine.

However it wasn’t wine that encouraged the building of a canal to link the Atlantic and the Mediterranean, it was the wheat trade. The idea that had been hanging around for a long time and had first been thought of by the Romans but they could not figure out how to keep it full of water as both ends would flow into the sea. It was Paul Riquet, a tax man from Béziers who worked it out during his contemplation of the problem whilst riding in the Montagne Noire (Black Mountains). His solution was to direct the many mountain streams into a man-made basin, the Seuil de Naurouze that sits on the water shed and from which the canal can be fed.

It was a mighty feat of engineering and took over 12000 men 15 years to dig the 241 km long waterway, spade work only, no machinery in those days! And it wasn’t only men who did the work, women would use the displaced earth to form the banks into which they planted irises, another Paul Riquet idea, he believed they would help keep the banks from collapsing.  Also to strengthen the banks and to provide shade, 42,000 plain trees (plantain) were planted and created a canopy that today we call the ‘Green Cathedral’.

A new port of Sète was built on the Mediterranean to receive and despatch goods and also village ports were created along the canal such as the very pretty villages of le Somail and Ventenac-Minervois.  The Canal brought prosperity to the region and southern produce to the north. Huge horse drawn barges would make their way majestically through the midi countryside and the stone built, almond shaped locks manned by their keeper’s would facilitate their rise and fall of the landscape.

The Canal du Midi opened on May 15th 1681 but its hay day lasted less than 150 years when the railways came to Languedoc during the 1800’s and were a far quicker and more efficient way to transport goods.

Today the Canal du Midi is Languedoc’s waterway for leisure and pleasure. The big hulking barges have been converted into luxury floating hotels that cruise sedately whilst guests relax on board and raise their glasses of rosé and wave at the cyclists and walkers that that have replaced the strong horses that once hauled the barges. Men dream of being captains for a week or two and take their families cruising for a Canal du Midi adventure. The old working ports and villages along the length of the canal have adjusted to their new roles whilst managing to keep hold of their sense of history. Many of the old port buildings have been turned into museums, shops, restaurants and cafés and you will even find a floating épicerie!

2016 is the 350th anniversary of work commencing to build the canal for it was in 1666 that the first spade sank into the midi soil. There will be many ways to celebrate this important year and to remember the people who worked so hard to create this incredible waterway. Last year we created our first Canal du Midi Wine tour which as well as olive oil tasting and a seafood lunch at the salt pans in Gruissan it also includes a leisurely private cruise along the canal whilst enjoying a Languedoc wine tasting.

To mark this very special anniversary we have created a second canal tour which we have named the Canal du midi Epicurean Tour that not only celebrates the canal but also the food and wine of the region. This tour runs on Tuesday’s so that we can include a superb local market where we will taste some of the local produce including French cheese and charcuterie. We visit a Minervois winery and enjoy one of our very special gourmet lunches before visiting an olive oil producer and tasting oils, olives and tapenade. We end the day with a relaxing cruise along the Canal du Midi whilst sipping some fabulous Languedoc wines.

Take a look at the video of this tour on our web site, our tribute and our way of saying ‘bon anniversaire Canal du Midi..!’

Languedoc Guardians is our way of giving back by recognising, supporting, and promoting the amazi... 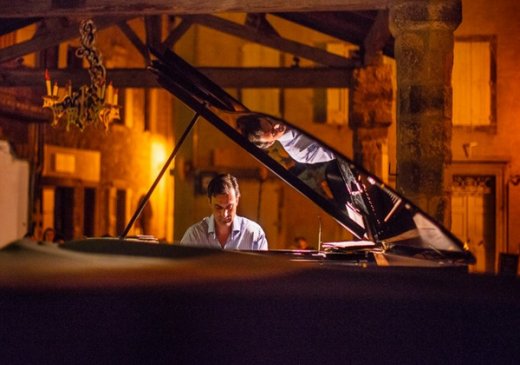 Places to Visit in Languedoc, The Blog

One of the things I have always loved to do when on holiday is catch a local concert if possible....